I have so much to say but…oh…ARRRR….matey. It’s talk like a pirate day you know so here…have some pirate girls. Better yet, stop by the etsy store to check them out. 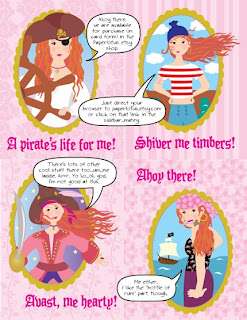 Also, slightly sad lunch. Cottage cheese, sweet potato, carrots and radishes. Saved from being totally sad because I actually like all the items involved and chose them. Not a very well matched lunch though, gotta work on that part.

Preparations have begun for FELT CLUB ’08. I’ll be there as a Tired Girl, but you don’t have to be tired to attend. It’s a fun way to get some holiday shopping done. Consider it, won’t you? 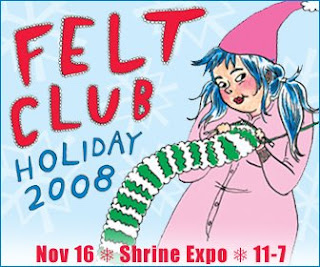 I am also considering switching over to the new blogger template thingy...yesh I am a terrible holdout but only because it took me forever to make this page the way I wanted because I know NOTHING about this CSS/HTML thing and it was really all about tinkering until I got what I wanted. Now, if I want to change it and have those nice little gadgety, widgety things made easy, I have to start all over again. Oh, who am I kidding. I don't have time for that right now! There are cards to be made, things to be...thunged...I don't know. It's a little goofy in here right now. Sorry. Carry on.
Posted by ren at 4:30 PM 2 comments:

From the Candy Blog, one of the more horrifying sentences I have read today:

"The squares are surprisingly light, not dense and gelatinous, more soft and fleshy like Mochi can be."

I do not want to imply that her writing is horrifying, it’s not, and I love her blog. It’s also not inaccurate, in fact, that’s is exactly what caught my attention, how very accurate the word “fleshy” is to describe the texture of mochi, for me anyway. I keep rereading that sentence and shuddering. You, of course, may enjoy mochi and that is certainly your prerogative…personally, I don’t enjoy it. But that is by turns the most horrifying and correct sentence I have read for quite a while. (For the record, she is describing Turkish Delight, another item which I have not developed a taste for, and if Edmund hadn’t it would be a very different story now, wouldn’t it?)

What I’ve been reading: Well, some time ago, Captain Blogger suggested that I read Midnight’s Children, and I did start it, and then I put it in a tote bag and forgot all about it. Yeah. I do that a lot. Still not sure where I put that Michael Pollan book either. But, I did find Midnight’s Children and it is now back in line. Currently I am reading My Name is Will: A Novel of Sex, Drugs and Shakespeare by Jess Winfield, who was a former co-worker of my husband. I’m not very far into it though because…

What I’ve been watching: …I’ve been watching some TV. Some of it has been catch-up stuff, some of it has been curiosity and some of it…well…I have no excuses. So there are the old favorites, Mad Men, Weeds, Burn Notice (not caught up, do not spoil). The things I watch with the husband but kind of don’t always enjoy like Anthony Bourdain: No Reservations and Entourage. The cooking shows I love like, Jamie at Home and Mexico: One Plate at a Time. The new shows I am watching out of curiosity like Gavin and Stacy and True Blood. And the things I can’t really explain, the mind rotting candy of Primeval which I think is supposed to fill the void left in my heart by Doctor Who but doesn’t because it’s really not good but I can’t stop watching poor Douglas Henshall looking surprised every time a dodo appears. And then there are the occasional forays into dvd collections like Jeeves and Wooster and The Thin Man movies. Not all at once mind you, and really not much at a time at all. It is kind of amazing how much time you save with a dvr.

What I’ve been cooking: There have been some cupcakes and there will be some more. I’ve got a package of chocolate cream Newman O’s that need to be used up so I am thinking vanilla cupcake, vanilla frosting, crushed up cookies. And lest you think all we eat here is cupcakes and brownies, there has been much fruit and veggie cooking around here. Plenty of red chard in olive oil and garlic, braised bok choi, baked peaches, grilled peaches, peaches with yogurt (oh how I love peaches), figs with yogurt, roasted brussel sprouts, roasted asparagus with chili sauce, salads, steamed corn and who knows what else. I do love summer veggies and I’ll be sad when it’s back to cabbage and beets and apples. Although I like those too. And there are various forms of meat to go with the veg, but you know I don’t care so much about those.

What I’ve been drawing: Christmas cards, Christmas cards, Christmas cards. Ugh. But I am pleased as punch with the things I’ve got in the works, so I am hoping they do well. I do have plans for a few more Hanukkah cards and some new notecards too. If you are into that stuff, keep an eye out. I try to remember to post here when A.C. puts new stuff in the store but I am forgetful. Just go here and look around, see if anything catches your fancy. Some of the newest stuff includes cupcake pendants and happy hungry monsters, robots and some rather unpleasant food.

There’s one final pinup for you coming after all this type-ity stuff. I’d be hard pressed to say which pinup was my favorite to draw but this one is my favorite joke (if you don’t know why it’s funny, don’t worry, it won’t matter anyway) but this is also the pinup that went through the most revisions. She started out just as kind of rock chick and eventually became a kind of rockin’ Uhura. Mostly I just wanted to have something that said “Rock out with your Spock out.” And now I do. So here she is before and as you can see, no hands, one sock, no shoes. She’s a bit of an urchin here. But I still like her with the pink hair and all and I suspect she’ll make a return appearance…somewhere…sometime. 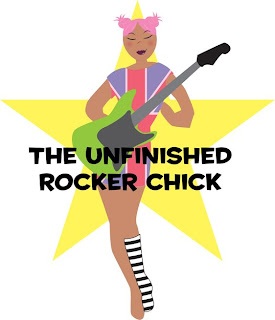 As for now, it’s all Christmas cards all the time as I gear up for a holiday craft fair. Oh, there are some Hanukkah cards too. And Chanukkah…and Hannukah. Whatever. All of them. I like to cover all my Jewish spelling bases. Oh, and hopefully, before that, there will be a few Halloween cards in the store. So, you know keep an eye out for that.

Meanwhile…you will never guess who I met last weekend…give up? I MET THE AMBITOUS HAMSTER. How cool is that? Well, very cool for me since I also work for her and this is the first time we have met face to face. We have emailed, IMed, texted, called and tweeted one another but this marks our first actual meeting. And it was grand. Hopefully she wasn’t too scared and will come back again sometime.

Sadly, there were no cupcakes for the hamster meeting, although she remarked that it would have been nice, and it would have but I was at work. Even sadder? There were many cupcakes the very next day. So many that we weren’t even able to eat them all and there were cupcakes enough for the whole weekend. And you know what…yum. I hate to say I make great food because really, that’s all just a matter of taste, right? I mean, what I like and what my husband likes are markedly different, so I can’t really assume that…anyway…I made two kinds of cupcakes and I gotta say, I done good on both. I started with “Crimson Velveteen” vegan cupcakes. Now, I am not a fan of the red velvet variety of cupcake. It tends towards oilyness and it’s not really chocolatety and holy cow it uses a whole bottle of red food dye. Yeeesh. Even this “Crimson Velveteen” recipe calls for 2 TBS of red dye but I could only bring myself to use one and then promise that I would find a more natural solution next time (I’m thinking dried beets will do the trick). But this recipe, even with the shocking amount of dye…fabulous. It bakes up so light and fluffy and not at all oily and because it calls for some chocolate extract, it actually tastes of chocolate. It’s different from a chocolate cupcake in a good way, not in an oh god what did I just eat way.

But then I started to worry that some of the people I would be with wouldn’t cotton to a red velvet cupcake, but I knew that at least one of them likes coconut, so coconut it was. And they were damn fine too. And they got better the second day when the flavor had developed even more. So sorry Hamster, I’ll make sure you get some next time.

And the final pin-up in the geeky girls set: 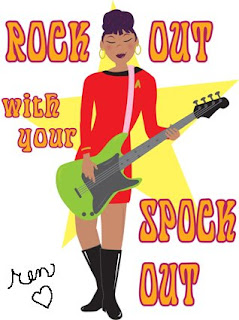