So, I am heading out to San Diego Comic Con shortly and this year, more than previous year, I seem to be feeling all the stress that entails. And you know, I’ve done this a few times so it shouldn’t bother me. But it does.

But that’s ok because I have a few things that help me through times like these….

Baby porcupines (known as porcupets) eating bananas and having the hiccups…


Baby fruit bats yawning…(sorry, can’t embed this one but it’s worth the click if you aren’t afraid of bats).


Eighty three year old ladies who can totally rock it.

Inspiring article on acting with a quote that stopped me in my tracks, “I could not be more alive than I am at this moment. I can't do most things in life. This is what I'm for.”

And the things you really need to learn. Not as cute as a pug with a stroller but important nonetheless.

I’ll be back in a week or so with tales of geekery, Doctor Who pinup girls and with any luck, a photograph of someone famous…but who?
Posted by ren at 6:48 PM No comments:

*Ahem*…Hi. This is what I wrote when it happened…


Oh dear, the LA Times caused a bit of a stir with a stupid (and kind of sexist) little article/slideshow called something like “A Girl’s Guide to Comic-Con.” It features (if you don’t feel like clicking over) some speculation on what cute boys will be appearing at Comic-Con to pimp their movies. Some people are bothered that it seems to assume that women only go to Comic-Con for the cute boys. As a woman who rather likes cute boys (OK, well…men, I am the anti-cougar and have no interest in anyone under the age of 39), I am a little more bothered by the fact that NO COMIC BOOK GUYS are featured in the story. Not a damn one.

Yes, yes, Comic-Con is now considered a “pop-culture” convention and believe you me, I have no problem with that. There was a time when (in my opinion) the movie and tv presence at the convention may well have saved the bacon of many a comic book company by generating a buzz that seemed to have dissipated around comic books. By bringing in the stars of movies based on comics, I think some new readers were led to our booths and tables and hopefully a new wave of fandom was born. So yeah, I’m ok with that pop-culture thing, as long as the comics are still important. And they are. And I love them, and I love the people who make them. And guess what…some of those people happen to be cute boys. I just wish the L.A. Times had mentioned that.


That was…a while ago. In the meanwhile the world has lost…a lot of people and think what you will of any of them, they all made some sort of significant contribution to this world and will be missed.

And other things have happened.

But blogging clearly has not.

This was written a while back too:

About a year ago I was traveling to the east coast by plane (I say by plane, because, as you may know, I am stupid enough to occasionally do it by car…but not this time). I was getting on the plane, waiting on the…what do you call that thing? The corridor leading to the plane? The gangplank? Well, I was waiting there as the inevitable backup had occurred. Someone was probably trying to put a child in the overhead compartment or something. How many times do you people have to be told that children should be checked? Aaaaaanyway, two girls, in their 20s standing in front of me having a conversation….

I’ve been listenting to this great band called MANAGEMENT.
Oh yeah?
Yeah, they are awesome.
Hunh. Haven’t heard of them.


The conversation carries on for a bit when the second girl, who has clearly been trying to figure out how to do this without making her friend look like a complete ass says:

It was the modern day “Who’s on first?” with the added twist of abbreviations.

I really wanted to let her know that the band does, indeed, go by the name MGMT and not MANGEMENT. But I was enjoying the conversation too much.

(I don’t really mean to make fun of this girl, I am pretty sure that almost every conversation I have sounds a lot like this.)

And it only serves to remind me that we are all someplace else sometimes when we should be right where we are….get it?

In the meanwhile. New cards in the shop. 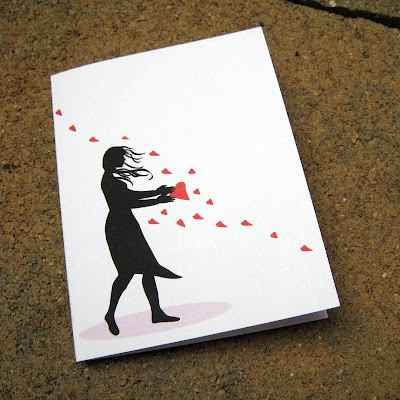