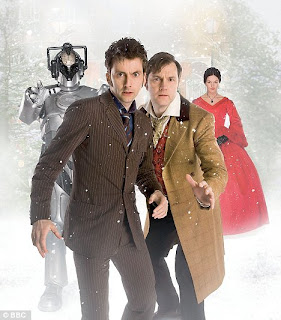 Some small things of note:

If you have been following the Doctor Who saga of “who is the next who”, you may be interested in some things I have read, which I won’t link, because I am lazy…

James Nesbitt is not currently “the one” but apparently, David Tennant thinks he should be and tells reporters to go congratulate Nesbitt on his new role. Mean boy!

Robert Carlyle is amazing…but I don’t know if I want him as my new doctor. On the other hand…Robert Carlyle. He is, however, signed to be on a new Stargate show, so I'm thinking no.

Rumors abound about the first female doctor. It is my understanding that it has already been established that Time Lords do not change sex when they regenerate. But I could be wrong and anything is possible. Billie Piper has been mentioned as the first female doctor but that’s just silly, and now, everyone is stumping for their favorite girl. Jennifer Saunders? Nah. Joanna Lumley? Nah, although, she did play the female doctor in a one-off, charity video a number of years ago. Sophie Okonedo? Hey, wait a minute…that’s interesting. She's already a part of the team as she's done some voice acting for...Scream of the Shalka, I think. But it gets better. Russell T. Davies has mentioned his interest (although he no longer really has a say) in Catherine Zeta Jones (meh) or…Lesley Sharpe. HOLDIT! If I’m gonna have a female doctor, you have just found her. Lesley Sharpe, if you have watched the most recent season, appeared in the “Midnight” episode as “Sky Silvestry” who was inhabited by the alien/presence that mimicked everything? Remember? Remember how she was creepy as hell? Well, yeah, that’s what she’s good at. And I love her. So if you gotta go for a lady, please do go for her. If you ever see her series "Afterlife" playing on BBCAmerica...dude, it's awesome. So, you know, if we gotta go female, let's do it right. (Also, she has a history with these guys, so that's good).

I think the current buzz is David Morrissey (again, someone with connections to the show and the writers and producers) and you know, that don't hurt, that don't hurt at all.

Oh, ok here, here’s one link with some (fake) info.


Ok, enough of that…well, one more thing. In my humble opinion, despite my deep love for the last two doctors (nine more than ten), I think we need a less sexy doctor for a while. Remember, he started out as an older man. There’s no reason he can’t be that again. It brings a different dynamic to the show and one I think is sorely needed at the moment.

Pecan pie truffles. Done. Haven’t tried one since they got coated in chocolate but they seemed ok. They aren’t true truffles and I had to adapt the recipe a bit to make them work but…we’ll see what people think.

Chocolate mint brownies. Done. To be gifted this evening.

Gingerbread Cupcakes….
Yeah…I ran out of sugar. I don’t know why I was so underprepared but there you go. No sugar. No cupcakes. But I will be making them in January because dammit, I really want them!

Shopping? Done.
West Coast Christmas? Done. I got a Roomba! Groovy. And lots and lots of books and cds. Excellent. And the complete Nero Wolfe series with Timothy Hutton. THANK YOU!

Have a happy whatever and a merry new year. See ya on the other side…I hope. 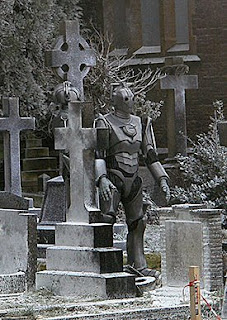 Many packages have been mailed (keep an eye out). No presents have been wrapped though. And right now, right this very minute. I am tired. All of the sudden and quite decidedly. But hey, it’s getting there. Although I am doubting that those gingerbread cupcakes will show up before I leave.

And for the record, let me tell you about making caramel. I like to do it. It’s one of my favorite things to make, but be warned, caramel is extreme cooking. It’s candy napalm waiting to happen. Boiling sugar? Oh hell yeah that’s dangerous. But, what you may not think about (but believe me, I do) is that when you add cream to boiling sugar, you get a hot volcano of death. So far I have survived but I can’t say that the eruption doesn’t scare the bejeezus out of me. Luckily, this Whisky caramel recipe doesn’t call for cream. Instead it calls for whisky. Which also boils up violently when added to hot sugar. Except, it sort of…growls at you first. There is a distinct grumbling sound and then the insane bubbling starts. I was expecting the insane bubbling…I was not expecting the prelude of deep angry sounds. I am glad they warned me to step away. I was in the process of stepping away anyway but man did I JUMP when the caramel started making that noise.

Finally, randomly…I was thinking the other day about the Peanuts, the Tao of Pooh and identifying oneself with a cartoon character…don’t ask why. But when I was in college, all those years ago, The Tao of Pooh was a very popular freshman sort of things to read. My friends and I realized that we all fit into the mold of a Winnie the Pooh character and really lead our lives in the manner of those characters. Then I realized that I also fit into the mold of one particular Peanuts character, who also just happens to be my favorite Peanuts character as well. So, I’m asking you…which Pooh character and which Peanuts character do you think I am…and which are you?

I watched Alvin and the Chipmunks. It wasn’t as bad as I imagined. Don’t get me wrong, it wasn’t good, but I’ve seen much, much worse (*ahem* I’m looking at you Grinch who ruined my belief in all that is good in the world). Yeah, there is that disturbing “raisin” joke but, I can see why an 8 year old might like it. That’s my review, “Reasonably watchable if you are eight.”

I read “The Curious Case of Benjamin Button”. I am a fan of F. Scott Fitzgerald but for the life of me, I couldn’t remember if I had read this before, because, in my ever so humble opinion, it’s not his best work. I found it depressing and discomforting, if well written. I fail to see how you get a…90 minute? 120 minute, more likely, “romance” out of a story that, to me, was about aging, birth and how the very young and very old are treated. And how callous we can be in the middle. Whatever. I probably wouldn’t go see it anyway. My cat, however, might. Have I mentioned that she is obsessed with Brad Pitt? Seriously, she has her own dvd of Fight Club. If he’s on the televison, she will stop and watch and the only other thing she seems to watch is cartoons. Personally, I am very interested in “Nothing Like the Holidays” because it stars John Leguizamo, who is either a rich genius who just does whatever the hell he wants or is a seriously underused and undervalued actor. AND Alfred Molina. Who is one of the future ex Mr. “This is so silly”s. Dude, he made Doc Ock hot. What can I say?

I thought I had all my Christmas shopping done. I was, of course, wrong. It’s down to those little things. Gift certificates, gift baskets. Things that I put off until the last minute (last paycheck). Close…so close.

I also thought I had my Christmas mix done. I was so very close this morning. It seemed a little depressing and I was trying to see if I could weave a few cheerful songs in and…um…I accidentally deleted the playlist. Oops. Well, it’s given me a chance to rethink and cheer it up. So…anyone want a Christmas mix cd? I’d be willing to trade for something similar…when I get it done…it’s so close….

It’s down to parties and candy making now. Three…possibly four, liquor enriched sweets. Guinness truffles, single malt caramels, bourbon balls and…if time permits, rum enriched pecan pie truffles. No time for any others this year. Oh but I did get suckered into making some cupcakes. I am thinking gingerbread w/lemon butter cream (faux buttercream, that is).

The deadline is near. Enter the Paperlotus Holiday Giveaway. It’s easy and it would make me happy. Don’t you want me to be happy?

If you are shopping (I am done save a few gift certificates, a bottle of booze and one dvd set that I may or may not purchse) don’t forget to check out retailmenot.com for coupons and shipping codes and if they fail you, although it seems rare that they do, google the store in which you are shopping and “coupon”. I saved at least $20 dollars this morning on some books that were presents…for me. But still.
Posted by ren at 6:07 PM 2 comments:

Oh I had plans. I had big plans. Four days off, no guests for Thanksgiving dinner? Plans, baby. Clean house. Trip to the storage unit. Christmas decorations. Yep. Big plans.

What? Oh, you want to know what got done? Um…well…my desk is a lot cleaner. And my kitchen floor. But that's about it. Oh there was cooking. There was turkey and stuffing and and roasted Brussels sprouts and sweet potato casserole. There was sticky toffee pudding and pumpkin pie. There were even emergency muffins made late last night when I realized there was no real breakfast food in the house and that I am done, DONE, with turkey. But there are no christmas decorations up. There are a few sitting on the table in the dining room (also known as my office, also known as the other side of the living room). There are plenty more in the storage unit. But no tree. Not yet. Maybe next weekend.

Oh, next weekend…there is a craft show. Tallmouse hosts the Handmade Brigade, which the Tired Girls attended in the summer and enjoyed very much. So, you know, if you find yourself in Cerritos, stop by. I'll have a soy peppermint mocha, no whip please. And if you are feeling generous, make it a grande. Thanks.

In the meanwhile, I have a suggestion for you. See, there is this other blog…the PaperLotus blog, where you may have seen my musings on artsy things. Well, we are having a little holiday giveaway over there. All you need to do is stop by and follow the instructions which pretty much boil down to: choose something you like from the store and post a comment with a link to it. Simple, right? And who knows, you might win something. So please do. Besides, we love the company. And sometimes I say something over there that's not so stupid. And we like to talk about art and craft, so maybe you'll enjoy it.
Posted by ren at 10:12 PM No comments: