First, I want you to see this: 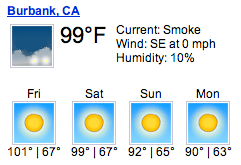 I'm pretty sure that "smoke" is not weather, unless you are in California.

Secondly, today I have read bits of Jane Eyre, Wuthering Heights, a Jim Butcher novel, a vegan cookbook and I am about to take a look at an Ian Rankin graphic novel. Tonight I will continue reading my werewolf book. I am trying to work on the books I so I can justify the Kindle I want. But then, I just read an article that says that the average Kindle user keeps their device for two years. TWO YEARS? I've have books that are older than my mother. I have books from the 1800s. And i realize that the point of a Kindle is basically to have those sorts of books that you read once and then let sit around until you remember to pass them on or take them to the used book store or donate, in a less physical form or something but...two years?

Anyway. Hot. Smoky. Books. That's pretty much the sum of things at the moment.
Posted by ren at 4:18 PM 3 comments:

So, here’s how it happened.

I went to Comic-Con. It went pretty well, I worked A LOT and didn’t see as much as I would have liked. But somehow I managed to talk to every damn person in that convention center, touch their money, shake their hands and lick their netbook keyboards. That’s all I can figure. Because I got the nerd flu. And I got it pretty bad.

Well, ok, look, I TRIED to eat right. I had fresh fruit and tea and veggies everyday. I avoided soda. I had a few cocktails here and there but…nothing like I normally would. But then…then there was the tacos, or maybe the it was the late nights? Could have been the air conditioned room. Could have just been all that breathing. But I did try. I washed my hands, I used that sanitary spray stuff every once in a while…but…welll… by the time I got back from San Diego I was exhausted and had lost part of my voice. Then I got a cough, then the aches…and you know how the rest goes. Nerd flu. It could have been worse, I am sure, but it was bad enough to keep me home from work for several days. And then, of course, even after much rest, hydration and vitamins and whatever, there was still the lingering weariness that the flu gives you. Oh and the nausea…there was that one day where I was getting ready to go to work and suddenly couldn’t.. Too weak, too feverish…too…sick. Out of the shower, back into the pajamas, call in sick and then collapsed on the couch. Woke up three hours later.

I am better now. Still a little tired. But hey, this is a hazard of hanging with 140, 000 nerds and I guess I am willing to…hazard it.

So, the convention went well. BFF came along and, I think to her own surprise, enjoyed herself a lot. She got to see David Tennant while I worked. And she was a huge help at the Tired Girl table, writing up sales and fetching beverages and veggie burgers. The table was, once again, very well received and a pleasant time seemed to be had by all.

Sadly, I didn’t have any celebrity customers this time, which is something I get a kick out of. But I did get to see a few famous-ish folks on the floor (Deborah woll, of True Blood, very briefly and Matthew Gruber Grey of Criminal Minds on crutches…some others I don’t remember at the moment…).

I sold some new art and it did pretty well. I did a series of pin-up girls that were inspired by various Doctor Whos. I chose to do girls for the fifth, ninth and tenth doctor and I hope to do girls for the other doctors eventually, and possibly even some BOY pin-ups inspired by some of the female companions. I did these for Comic-Con because…well…geeks…you know. And the ninth doctor pin-up did sell out (OK fine…I didn’t take that many, but I came back with…NONE! Yay!). So it was a good show. I sold plenty of cards, some prints and lots of flirt cards, I had a good time. I saw a lot of people and then I got sick. That pretty much brings us up to date I think.

Here are some "parts" of my girls. I'll show you more and tell you a little bit about them later. But for now...nekkid girls!