Last night I decided that I wanted an egg with my dinner. It was a breakfast for dinner night and I thought an egg would be lovely with the Kashi waffle and veggie bacon. And I was right. The thing I is, I don’t generally care about eggs and I eat them so rarely that I am not very good at making them. I can scramble. Oh yes, how I can scramble (I use water instead of milk or cream…something about the proteins? Or the steam? I don’t remember, but it was in a book.) I can boil, soft or hard. I don’t think I’ve ever poached and egg but I am betting I could. It’s the frying that’s the problem. It should be easy enough but I can’t get the timing right and I either break the yolk or I cook it too long or, worst of all, I don’t like to cook eggs in butter so I use olive oil and they get really, really brown and look gross (but they taste fine, I swear). So last night, I figured it was about time to try something new. Baked it was. And it worked perfectly. One good egg was a perfect serving with the other stuff. It was easy. I DIDN’T HAVE TO PAY ATTENTION TO IT! That’s the biggest thing for me. I get home from work kind of late and I like to be able to put the dinner in the oven and let it go while I change clothes, give the cat her meds, check the mail, go to the bathroom, gather up clothes for the next day, prepare my breakfast and sometimes lunch for the next day and put away some dishes.

You know what I’d like even more? Someone else to do all that stuff…

Anyway, it worked well, it tasted good and it’s a keeper. Baked eggs are nothing new but if you are not a fan of standing over a frying pan it’s a nice way to go.

Here’s what I did:

-Buttered small ramekins (Next time I will use olive oil. Turns out, I don’t really like butter all that much. But, I had some in a small dish from a dinner I had served to friends the night before so it was convenient. Live and learn. Olive oil or Earth Balance next time.)

-Cracked one egg into each ramekin.

-Topped with salt, pepper and parsley.

-Added a few drops of soy creamer on top. A very few drops. Just enough to dampen the yolk really. I had read that the eggs could dry out without the addition of cream or milk and I had no cream or milk because I don’t really like cream or milk (or eggs…except last night, or butter…) so soy creamer it was. I was worried that there might be a protein issue here like when you add soymilk to hot coffee....it kind of curdles a bit…but no. No problems. Then, because most of the recipes I read called for it, I added a bit of cheese. Parmesan on one, cheddar on the other.

-Tossed the whole thing in a 350° oven for about 14-18 minutes. I let them cook a little long because I was unsure about how well done they would be. 18 minutes was fine. 14 would have been fine too, for a runny yolk.

-What I’ll do differently next time:
Olive oil instead of butter, no creamer on top, no cheese on top, possibly a wee bit of toast on bottom, and some frozen spinach, and if I have it, a slice of tomato. And maybe some other herbs, like thyme, or some green onion. And despite the fact that I claim not to like eggs (unlike Snarkydork, who REALLY does NOT like eggs), I think I might use two eggs in a slightly larger ramekin…with previously mentioned toast (or bread), spinach and tomato.

Congratulations to me for doing something else that the rest of the world has done for ages. Yeah, I’m not breaking new ground here. But it was really good.

Oh, also, if you are looking for more things to read, I've been posting a bit over here...
Posted by ren at 6:15 PM 3 comments:

Labels: cooking, discovering the obvious, food, pimping the other blog

Where have I been, you ask? I have been doing my civic obligation, my friends. And I hope to never have to do it again. Thirteen days of jury duty didn’t convince me that our legal system is the…well…look, it’s better than some, but it’s far from perfect. And while I can legally tell you all about the trial now, I don’t know that you care. Let’s say words like whistleblower, probation, psychiatrist, forensic accountant and pain in the lower back and leave it at that for now. It wasn’t fun. It wasn’t the kind of learning experience I like having and when your 20 minute commute is the highlight of the day, something bad is happening.

For the record, my usual commute is no less than 40 minutes. Today was an hour. Twenty minutes was pretty nice as far as that part goes.

So, that’s pretty much been it lately. I’ve been doing some art for a friend’s website, but not much else art wise…soon though…soon my pretty…

And other than that:

What I’ve been reading: Scott Pilgrim vs. the Universe, which was, as Scott Pilgrim comics are wont to be, entertaining. But it confused the hell out of me. Characters start to look alike and hey, I thought this was the last one! (Apparently, it's not.)

The Reckoning The Murder of Christopher Marlowe.- I am not so much a Marlovian (look it up, it’s for real) but, as a friend once told me, I clearly have a crush on Kit Marlowe. I’ve only just started this book as part of my “read more non-fiction” initiative and it’s interesting.

Pigeon Pie-Ah, Nancy Mitford. It’s dated (WW2) and snobby and funny as hell. Rarely do I actually find myself laughing aloud at a book, but this one got me several times. It made cheerful reading in the hallway of the courthouse while other jurors were, oh, you know, BEING INCREDIBLY LATE.

Midnight’s Children- Salman Rushdie-Yeah…still reading this…slowly. I don’t know, I get it, I get why he’s famous, I just don’t know if I like it. He’s awfully in love with his words.

What’s next: Well, I just got two books in the mail that are non-fictions about 18th century women. One I bought because it was also written by Nancy Mitford so I am looking forward to that. There’s also a book called Lonely Werewolf Girl hanging out in my living room and I am thinking that’s next for fiction.

Oh goodness…look at the time…you don’t need to know what I’ve been watching (Sheep themed horror movies), cooking (root beer cupcakes) or drawing (cute little girls), do you? No, I didn’t think so.

I’ll get back on some sort of schedule eventually.

Can you believe this shit? I am STILL commuting to the Hall of Justice and I have at least one more day to go. But I have said that before...

Here's the really good part. They are closed tomorrow. I have to go to the office. And then back to the duty on Friday. 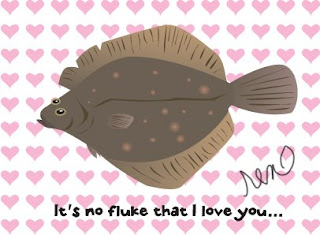 Ah well, sometimes love isn't pretty. You can find this card in the store. There's no real explanation here except a fluke and a flounder are essentially the same fish except for the location of the eyes. And how you tell the left from the right is beyond me. Basically, it's a valentine joke for my dad. But if your valentine loves fishing, perhaps it will work for them too. Or...you know...if you really just want to confuse someone...go for it.


Ok, NOW I am out for a few days. I just wanted to show you some valentines before I had to go back to the HALL OF JUSTICE...yeah, i only wish Batman was there. Even Aquaman would do.
Posted by ren at 5:33 PM 2 comments:

Sorry. I've been doing my civic duty for five days and foresee at least five more. I'll be back in touch if and when it's done. Until then... 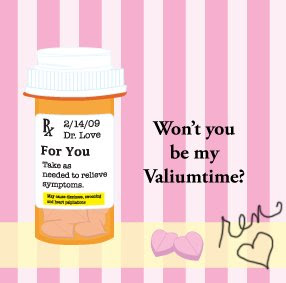 New cards are available in the store. For the not quite ordinary Valentine.
Posted by ren at 5:21 PM No comments:

Coming in under the wire. Posting a link to download this Neko Case song because:

A) Neko Case is freakin' awesome. So there.
B) $5 will be donated to the Best Friends Animal Society, which is also awesome.
C) I love animals, I love Neko. Can't go wrong here.

I am sorry I didn't get it up in time for you to follow suit...unless you follow quickly.
Posted by ren at 5:07 PM No comments: