I am going to be completely honest with you here. I am burnt. And crispy. Like toast. Burnt, crispy, toast. Or bacon. Overdone. Uncomfortably crunchy. No, let’s go with toast. I like toast. I don’t care so much for the bacon. I am toast.

It’s been a busy three or four weeks around here. Traveling, birthdaying, premiering, Felt Clubbing, and having a cold has taken it out of me. Add on the poor air quality due to the fires and I am left a crispy outer shell with very little inside. But you know what? I am left, and my home is intact (messy, but intact) and all my people are ok, so I guess being burnt out, is a lot better than some of the alternatives around here right now.

Felt Club was good. I think we were pretty successful. We always get nice people visiting us and this time was no exception. And hey, there were also people we sort of know. Friends and internet buddies stopped by and that was lovely. I bought stuff that I don’t need but want anyway and that too was lovely. An adorable “soap dish” that is destined to become a display stand for the perfect cupcake, a very excellent print of a bat, a charming watercolor, a nice little bag…probably some other things that I am not remembering. It was big and it was loud and it was crowded and it was fun but on top of everything else, it was pretty exhausting.

And besides that, I had, AGAIN, this weird blushing problem. See, I am pretty shy. I do blush quite a lot when I have to talk to strangers but usually, it’s like, in a classroom situation, or being singled out from a crowd, which I guess is not really that strange, right? That’s a normal reponse, to blush when put on the spot. But here, it happened twice, no…three times during conversations that I instigated. And when I blush, I get really embarrassed. Which is kind of the opposite of how it’s supposed to work, right? But yet again, while talking to a very pleasant artist that I am fond of, I felt my cheeks flare red and I hightailed it out of there. And again when I spoke to a handbag designer and yet again while talking to a cartoonist. Now, partially I can say that I get bashful because these people are good at what they do and I feel a wee bit tiny next to them, but you know, I feel a wee bit tiny next to pretty much everyone, so…I don’t know. Any one have any ideas on combating that creeping flush?

Anyway, now it’s on to one more craft show, this one a smaller deal, but a very nice one, I am looking forward to that. And there’s a little bit of work to be done for it, but nothing too scary. And there’s thanksgiving. Which I thought was two weeks away. And I was wrong. So…yeah. And apparently I am cooking for all of you, so I guess I need to go shopping. And for the record, we usually have Pilsbury orange rolls from a tube for Thanksgiving breakfast. Years ago I would make beautiful cinnamon rolls or muffins or something lovely and take it to my girlfriend’s house. We would eat sweets and drink coffee and go off to our alma mater’s football game and it was a lovely tradition. Until her husband said “Wow, these are good cinnamon rolls, way better than yours, honey.” Thus ended the Thanksgiving breakfast…well and I moved away so…you know. But it’s orange rolls this year, so come early if you are into that (Brenda). 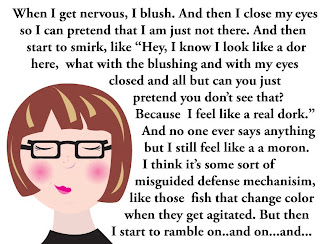 At the moment, the thinking is this:

And for dessert:
chocolate tart with hazelnut crust

But I am sure that I will feel guilty for not making a pumpkin pie and overcompensate with some kind of pumpkin cupcake or cookie or…pie.

Also watch for hors d’oeuvres to be added, as well as various side dishes as I start to worry about not having a “thanksgiving” feeling…for two people. I’d say you’ll probably see the appearance (or at least the consideration) of: deviled eggs, cheese and olive platter, pastry wrapped olives, cheese straws, home made breads, another vegetable, possibly a salad, corn bread to replace rolls from a tube, various wines (although I am the only one that drinks them), ice cream to go with whatever kinds of pies, and as long as I am making ice cream, maybe I should just go ahead and make chocolate chip mint, since that’s his favorite, and since I don’t eat ice cream, maybe I should make some soy cream too…


Yeah, I always start with the best intentions. 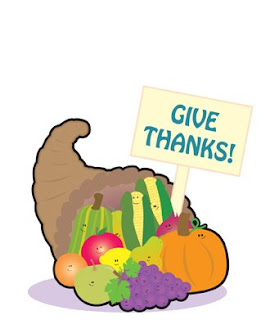 Aren't you thankful that Thanksgiving cards are available in the store?
Posted by ren at 5:07 PM 6 comments:

Feeling a bit weary at the moment due to a cold that I received for my birthday. Yay. Thanks. Don’t know where it came from but I literally felt it arrive. I was talking to a friend’s mother and aunt and my nose started to tickle. At first I thought it was an allergic reaction to some perfume but no, it was a wicked little sniffle. I’ve been trying to kill it off with loads of vitamin c and some elderberry stuff and truth be told, I’ve had much worse. Today, however, I feel pretty uggy.

Still I had several nice dinners out over the weekend. Several cakes (no, seriously…several cakes), received many excellent gifts and one cold and it was a really nice way to get older (except for the cold). And I am old. But not bothered by it. I think I’ll save that post for another day though.

Anyway, things are in high gear around here for Felt Club. I have not done nearly enough cutting and folding and packing and ironing and what have you so it’s really not going to settle down before Sunday. And then we have another show on the sixth at Tallmouse in Cerritos, the Handmade Brigade. So, you know, please do stop by if you are in the neighborhood. And if you are not…here’s one of the new Christmas cards… 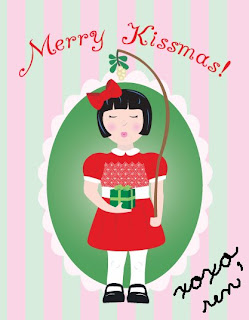 I dunno, I am kind of fond of her. I think she’s cute but I also think she’s kind of…creepy…what do you say?
Posted by ren at 5:55 PM 4 comments:

So I just read saw through Boing Boing via Defamer that we are not the only childish, immature people to make the “I Farted” sticker, which I never really doubted anyway. I am pretty sure we were the only people to have the “I’m Hammy” sticker though.

And I forgot to mention some of the costumes I saw on Halloween. Actually, I was kind of concerned at first because I kept seeing people that could have been in costume or could have just been, you know…kind of…off. I saw a woman that I thought was dressed up as a 70’s lady. Bell bottoms, wedge heels, cute scarf at her neck and big sunglasses, but the bad wig threw me off…it wasn’t bad in a good costume way, it was more bad in a “I accidentally shaved my hair off and all I could find to put on my head was this dead cat” kind of way. So I got confused. Then there was the guy who could have been dressed as a golfer, or possibly a hip-hop moguls umbrella carrier or…he could just really like obnoxiously argyle sweaters. Dunno.

But the best bad costume, by far was worn by a teenage girl. As I was driving home I encountered a little pack of them. I’d guess they were 15 or so but I find that I can’t really tell with teenagers, especially in L.A. they could have been 12 for all I know, either way, they looked a little too old to be trick-or-treating, but there they were with pillowcases. There was the sexy Native American, the sexy nurse, the sexy punk and my all-time personal favorite…sexy Marilyn Monroe.

Seriously? You had to shorten the skirt on that iconic white dress? You had to make the neckline even lower? And how old are you anyway? Does your mother know you are dressed like that? Sexy Marilyn? Really? Just…don’t you…I…oh never mind.

And Janet, the recipe for the cheeseless mac and cheez was from here. I didn’t use green beans, I had chard on the side, and I was profoundly slap-dash with my measuring…and I used whole wheat pasta because that’s what I had. But it worked out just fine. And it took, like, no time at all.
Posted by ren at 7:12 PM 1 comment:

Labels: i don't know, whatever

I, too got up and voted this morning. No real wait at my polling place which I refer to as “some dude’s garage.” That kind of drives me nuts as I think all polling places should be public buildings but I guess we really do need every available space. I let an elderly couple go ahead of me, I was in no real rush and they actually arrived before me but walked very slowly.

So, when I lived in New Jersey, we didn’t get the little sticker, I’m not sure that they do now either, but here in L.A. we get an “I Voted” sticker and hopefully, I will see a lot of them today. However, if you voted by mail you won’t have one, so please feel free to print yourself one of these…

Heh. Sorry, I work with children, by which I mean, I work with a bunch of boys who wanted me to make this for them a few years ago. There was, at one time, an “I’m Canadian” sticker and one that said “I’m Hammy” for my friend Hammy. But really, this is the one that is most effective. And gross.

And in other news, I made vegan mac and cheese (which had no actual cheese, hence the cheez) and it was…surprisingly…good. More than edible in fact. Jason claims it was delicious but Jason claims all my food is delicious and I know for a fact that it is not. Still, I was impressed by how easily the recipe came together and how flexible it could be, and still be vegan. On the other hand, I also made some cinnamon rolls. And they didn’t work. And I knew as I was making them that they wouldn’t but I went ahead anyway. It was mostly my fault, but the recipe is slightly suspect as well. But like I said, as was making them I was thinking, this flour isn’t gonna work, and this milk is too hot, and that’s too much yeast and not enough rising time…ah well. It happens.
Posted by ren at 12:29 PM 2 comments: