My day has been…fine. It started out ok and I suspect that it will end ok. But apparently, everyone else’s day has been crap and right now it seems as if I am hearing it all at once. Every phone call, every conversation, every minute on the radio, the internet…everywhere has been filled with yelling and anger and illness and sadness and pain and…what ever else. And even when people haven’t been angry or ill or sad or in pain, they have been yelling (HEY, use the damn telephone or get off your ass and walk into the office, don’t just yell across it, asshole!) and grabbing and begging and quite frankly, whatever was fine about my day has now wandered by the wayside and periodically strays dangerously close to the traffic. It’s been frustrating to say the least. And I’d like to say that it’s all over but the shouting but the shouting started early this morning (All right. Let’s be honest here, my version of “early this morning” is totally different from yours, ok? Don’t ask me what my version is, just assume it’s much later than yours).

And the worst part is that my day started out ok and it will probably end ok. But the in between has been one heck of a day.

Anyway, what has brought it all back into focus today is listening to Stephen Fry’s first “podgram.” The story wanders a bit and when he reveals that he’s been recording this under the influence of sleeping pills it kind of feels like “Well, duh, Stephen!” but his voice is soothing and his perspective is…familiar and frustrating and it’s a perfectly pleasant way to block out the shouting.

And since this all sounds so…eh. Lame? Pathetic? Unsatisfying? BORING? Here are two little recent bits of…things…that I have been working on. My new business card, which is funny if you know me because I am anything but business and not only don’t know of anyone who needs my info on a tidy little card, I will not be introducing myself to anyone and offering them my card because I don’t talk to people. At all. But, as my mother has said so many times, I had a coupon. And it got me cheap cards. All it got my mom was boxes of things we never ate. So that’s something. 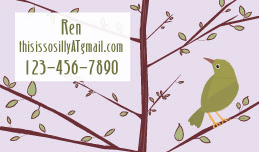 Also, I did a little artwork for Ms. Smith’s website. I think it looks nice. She requested that I use red and turquoise and I did, for the most part. Unfortunately, I have no web design experience so I had to go back and do that whole “web safe color” thingy, and that was a learning experience. Two hundred and sixteen colors indeed!

Oh weird. While I type I am listening to free classical music from Lisztonian and some other site that I had open must have had some sounds for when you click on something (see, if I was a web designer type person I would know what to call those...sounds). Aaaaanyway, right in the middle of Etude in B flat Major Op. 36 No. 6 by Moritz Moszkowski it sounded as if someone started yelling "HELLLLLO! HELLLLLLLLO!" in that manner that you use when someone is being dense. So now even my computer is yelling. Damn.
Posted by ren at 6:08 PM 6 comments: 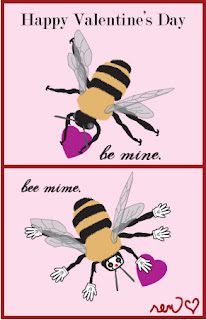 Available here if you want to stock up for next year or give one to your all the time Valentine.

And for my favorite holiday? It's pizza and, hopefully, season two of Life on Mars. The husband's present is delayed a day but he won't mind once he sees it.

I am currently that kind of tired where I think something like “Gee, my stomach hurts, I think I’ve had too much caffeine.” And then I think “Caffeine? You’re soaking in it!” and then I chuckle softly to myself but then…THEN…I realize that my joke to myself made no sense and I try to defend my joke, “You know, like Madge and the Palmolive? Mild? It’s more than just mild, you’re soaking in it!” and then I realize that when I have to explain my own joke to myself and then defend it as being valid humor, something has gone terribly, terribly wrong in my head.

And it’s a pathetic tired because what kept me up was a very simple problem, which I believe I may have solved but if I come back tomorrow and make more Palmolive jokes, you will know I haven’t.

The other thing that my mind spent way too much time processing today was the six degrees of literary separation of Shakespeare and Audrey Hepburn. It’s actually way less then six degrees…any idea how? And for the record, it does not involve Audrey acting in any Shakespearian plays.

I also only just realized that Palmolive probably comes from those two words…palm and olive and suggests the moisturizing properties of the olive on the palm. Duh.

So, um, Ren, next time you decided to make that instant mac and cheeze (the totally organic hippie kind, not the scary orange kind) and you take the cheese powder sachet in hand and go to do that thing where you shake it? You know, like when you have a packet of instant gravy or cocoa (Oh and by the way, stop mixing those two up. You really shouldn’t drink instant gravy in a mug before you go to bed)? That thing, where you kind of grab it by one end and shake it like you shake a thermometer when you are trying to get the mercury down below body temperature? That motion like you are kind of fanning yourself? Right? You know what I mean? Yeah?

Make sure that there isn’t a hole in the bottom of the packet, okay? Because apparently cheese will fly out of it and directly into your face resulting in the dreaded “cheese eye” and it will be quite uncomfortable for quite a while despite washing your eyes with both water and eye drops. And later in the day when you rub your face you will realize that your eyebrows are still full of cheese powder and then when you cry from the laughter, your tears will be slightly gritty and dairy scented.

For the record, I have not seen Cloverfield even though I previously referred to it. You know how when The Blair Witch Project came out and there were these warnings that the motion of the camera may make some people sick and you thought, “Dude, what kind of asshole gets sick watching a movie?” That kind of asshole would be me. So I now studiously avoid movies where the camera moves too much, and by too much I mean even a little. I didn’t even make it through the first ten minutes of The Thing.

I did watch all of They Live, though. Not that They Live has a shaky cam or anything. I just love me some Rowdy Roddy Piper.
Posted by ren at 6:58 PM 5 comments:

I’ve been having a lot of dreams lately. And it’s not that they have been strange dreams, just that they have stuck in my head. I do dream, but I don’t often remember my dreams, I usually just remember waking from a dream and thinking “Damn, that was one weird…um…thing…in my head…what was that? Oh yeah, it must have been a dream…what was it about again?” Dreams tend not to stick with me. I’ve tried keeping dream journals and all that, I’ve tried to wake myself from a dream so I will remember it but eh, not really that interested in what my subconscious wants to tell me. Why should I listen to it? What has it ever done for me? But these recent dreams have been pretty clear and memorable. And not so out of the ordinary that they are freaky, but almost so ordinary that they are freaky.

I’ve documented the nightmare that was my senior prom before, but the other night I had a dream that totally seemed like the B story of my senior prom. It featured people with whom I attended high school, in a prom like setting, wearing prom gear, but it was all about the prom I didn’t go to. I knew these people, I recognized them but none of them were the people at the table full of misery. In fact, they all seemed to be having a reasonably good time, downstairs from the crappy prom I attended. There was an elevator to get to the room that I would end up in but all these people were in some kind of sitting room/bar just sitting around hanging out. Of course, this being a dream and all, there was some sort of impending doom. I got the feeling that it was something of Cloverfield proportions but everyone was pretty mellow about it.

The thing is, I can usually figure out WHY I have a dream about a particular subject. Like, often when I have a dream about someone I haven’t seen in years, I can trace it back to something that has happened in the last week. Some instance that in the back of my mind jostled the memory of this person, or even of an event. But I can’t find the connector this time. No idea why I dreamed of the other part of my prom, the part where people had a decent enough time. Also no idea why my prom dress was navy blue and very lacy.

Then later in the week I had a dream about getting a tattoo on my back. Now I do see tattoos everyday, and I have recently pulled a muscle in my back, so I can kind of see the connection, especially since I was awakened from the dream by a sharp pinching pain that did actually exist. I do not, however know why I got a cupcake tattoo or why I chose to have it done at a bar that actually gave it’s patrons the money to pay for their drinks. But I would like to find this dream bar…oh yes I would.

And now the really weird one…the one that I have already forgotten. There was a strange one this morning that involved a lot of numbers…but it is gone now. I guess this is why I SHOULD keep that dream journal. Actually, a lot of my dreams feature me forgetting numbers, so maybe this wasn’t a new one.

I don’t know what are brains are trying to tell us with our dreams. A lot of people think it’s all about dragging up our subconscious fears and desires. Apparently, I fear proms and navy blue lace and I desire cupcakes and free beer. I am pretty sure I didn’t need a dream to tell me any of that. 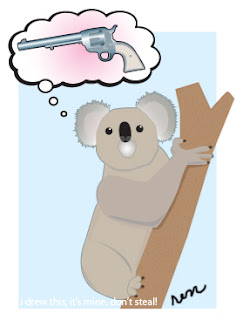 Everybody knows that koalas dream of revenge.

BY THE WAY! You can totally buy Vengeful Koala cards in the Paperlotus Etsy Store. You can also buy Valentines! And other awesome stuff...go on, you know you totally want to. OK, fine, you know I totally want you to!
Posted by ren at 6:35 PM 2 comments: