Here’s the thing, I’ve been writing a lot lately, but…not posting because I haven’t finished a damn thing. But today, Janet scolded me and I was already typing this so…I’m gonna throw a few of my not quite finished posts up here because yeah, I do feel like a slacker for not having finished any of them. So here are some lists of things because…that’s the best I can do right now.


Things made since last I posted:

Lemon lavender lace cookies-They were good, they just weren’t what I was planning on making. Not the lace part anyway. They were supposed to just be sugar cookies but all I can figure is that I wasn’t paying attention and left out some flour. HOWEVER, they were much lauded and well recived at beach party and I was told by one person that I need not make any other cookie ever again. So…I guess that’s good.

German chocolate cupcakes-these were pretty good. The cake was nice, although I really do just prefer a chocolate cake. The icing was different than the usual German chcoclate cake icing and it was less…sticky and more…pudding-y. which I rather liked.

Almond zucchini cupcakes with a marshmallowy, lemony frosting-these too were pretty good. I really liked the frosting, which was what I think we used to call a 7 minute frosting, which is basically a meringue. No butter. Which was a nice change. But it was sticky as all hell and kind of messy, so I am thinking of tinkering.

Aaaaaand…I think there was an emergency focaccia and some shortcakes in there as well.

There was also a birthday and an anniversary since last time I stopped by and now…well, I guess everything from here on in leads to comic-con. Sigh.


Random images found in my “inspiration” files:
1 moth
2 foxes
1 Alan Rickman
1 Dalek
4 Jeffrey Dean Morgan as the Comedian (and yes I know the Comedian is an awful character but I love that moustache)
3 Hellboys
2 Colin Firth
2 Wolverine images (Hugh Jackman style)
2 Thom Yorke images (Hunh? I mean, I do love the man and all, but when did I put those in there?)
1 Christopher Eccleston and 1 image from Doctor Who episode w/Christopher Eccleston (the valet parking ticket from The End of the World)
4 dresses made of paper
1 Trevor Eve
Many cupcakes

Go figure. That really sums me up, doesn’t it?

And finally, just because…

Rockstars I may or may not have had crushes on over the years:

Have at it. i know you've got something to say about it....


Also, because I have been working while you weren't looking, some samples of new art.
Cupcake treeeeee, how I love theeeeeeeee... 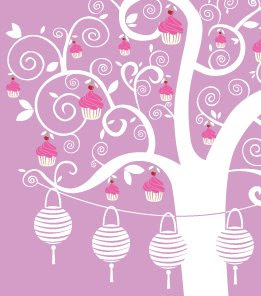 And this is from a piece titled "He said I have a good personality..." 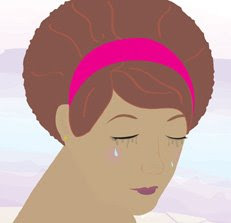 Let me help you. Just take it from me that these are good ideas, I tested the theories so you don’t have to.

-Always put sunblock on the tops of your feet if you take off your shoes outside. And if you are wearing shorts, the backs of your knees as well. I wasn’t wearing shorts otherwise I might have remembered the tops of my feet when I did the backs of my knees. But I didn’t do either and my poor tootsies have suffered for my lack of attention.

-While baking is easy for some, it’s still a process that requires some amount of attention. You can always count the eggshells if you forgot how many you added but there is nothing left behind when adding flour. While the lovely, buttery, lacy lemon and lavender cookies were good, they weren’t what I was trying to make. So…um…pay attention.

-Primeval starts up again here on May 16. My advice is watch this show as if you were a fourteen year old boy. It’s easier to enjoy that way. Well, that way or with a cocktail in hand. How do fourteen year old boys feel about Douglas Henshall though? Because…yeah. Just watch. It’s good, stupid fun. But don’t expect, you know, real science or anything.
Posted by ren at 6:11 PM 6 comments:

I just found this post that I started and never quite finished. So I am posting it. I can do that. It's my blog.

What I’m reading:
Queen of Fashion: What Marie Antoinette Wore to the Revolution by Caroline Weber.
I read about this on The Dutchess of Devonshires’ blog and got interested. I have never been big on French History or the 18th century but I am really, really enjoying this book. I did study some costuming in school and really loved it but didn’t want to make a living at it. This book is making me reconsider that. What can I do that would involve just studying clothes without having to sew them? Because I don’t really like sewing all that much…

Lonely Werewolf Girl by Martin Millar I’m enjoying this one a lot too. It’s become a bit of a court machinations sort of book, but I like that. It’s hard to write a good and convincing werewolf story…I’ve read a lot that don’t succeed, but so far so good on this one.

Just about finished The Mysterious Affair at Styles by Agatha Christie on Daily Lit and trying to decide if I want to do another Christie or if I’m feeling my spring need for some Shakespeare yet…maybe one of the histories that I don’t remember...

What I am watching:
Well, I’ve been trying to clear off the dvr and I did finally watch Wuthering Heights, Oliver Twist and Sunshine. Now it’s on to Richard III with Sir Laurence Olivier, Little Dorritt and a documentary about Nick Drake. I like to run through the channel listings for some of the more…esoteric sorts of channels and record random stuff that I might not otherwise catch.

Wait! Wait…I wrote this awhile ago and I watched that Nick Drake doc. It was ok. It was very…well…dreamy. Lots of time lapse of a shadow falling across the floor and the like but…eh. I don’t know. I really like his music but I don’t have that great sadness that seems to come with being a fan of his work. It was interesting that there was so much family stuff available though. Lots of family film and recordings, which made for some interesting listening. I ended up not finishing watching Richard III though. I wanted to but was running out of room on the dvr and wasn’t enjoying this version as much as I had hoped. Very stylized and old fashioned. If you’ve never read or watched Richard III, it’s one of my very favorite plays but it can be a little hard to follow if you aren’t a Shakespeare fan. I’d tell you to watch the Ian McKellan version, but last time I suggested that to someone it only confused them more. Maybe just read it. That’s probably the best way to go.

Also loving Lie to Me. At the moment I feel like I could watch that show every day, but that might be my eternal crush on Tim Roth. (This just ended for the season and I am looking forward to it's return next season).
Posted by ren at 6:07 PM 2 comments: