Also, I've been thinking about fixing that whole format thing. I spent a lot of time playing with html to get my blog design ages ago and really enjoyed the tinkering, but I don't really know what I am doing when I mess around like that. I may just grab a ready made template soon and fix all the goofyness with this sad old blog. We'll see...in the meantime, sorry about the silly mis-sizing of things and all that...
Posted by ren at 4:52 PM 2 comments:

So, Comic-Con. That happened.

It was good. Busy. Exhausting. All the stuff that it always is. And good. I had fun. I lost my voice. The new stuff seemed to be well liked. I didn’t see the sun. Well…that’s an exaggeration, I DID see the sun, but only as I entered and exited the hall. I was busy like a little bee and that’s fine. I didn’t see very much of the floor, also fine. And I didn’t see the zombies that were apparently out wandering in front of the convention center. Which was more than fine.

I did go to a party which was supposed to be attended by Charlaine Harris. She of the Sookie Stackhouse novels. She wasn’t there. Eh. I had a cocktail and went to dinner instead. I saw China Mieville from a distance. Miss Smith ran after him to have a conversation. She said he seemed nice but that maybe there was a little crazy in there. But there’d have to be, no? Saw a few other famous faces here and there, tried to will them to come purchase my goodies (heh) but no…no interest. 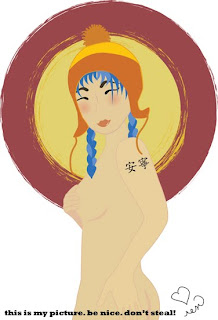 See her tattoo? It (hopefully) translates to “serenity”. See that circle thing behind her? It’s meant to be reminisicent of a particular logo. See that hat? Are you with me yet? She’s called “Jayne’s girl” alternate title, “How’s it set?” And I had hoped to see Adam Baldwin somehow. I didn’t EXPECT to see him, but I figured that if I saw him, I would give him one…print…I mean…not…anything else. Unless he asked…but probably not even then…anyway….I didn’t see him.

But that’s where JHo comes in. He DID see Adam Baldwin. They were on the same train. THE Adam Baldwin that I may have gazed so lovingly upon many years ago in a little film called “My Bodyguard.” Oh, you can have your Matt Dillion. I got me a big ol’ strapping man! And JHo saw him and in the beat of a generous and kind heart, decided to approach him with my art. Mr. Baldwin has been reported as saying “Nice, nice” upon viewing it. I forever thank JHo for his kindness.

And that said, I have to acknowledge that Mr. Baldwin and I do not see eye to eye politically. However, I don’t need to talk politics with him and I do admit that he doesn’t appear to be of the crazy variety. He is well informed and well spoken, just…the polar opposite of me belief-wise. But that’s ok. He’s pretty.

And…that was pretty much comic-con. Until I do it all again.

And since then there have been…coconut cupcakes made with coconut cream that were really lovely. Snickerdoodle cupcakes that seemed to do just fine. Several batches of vanilla cupcakes that no one complained about. Vegan rootbeer cupcakes that vanished rather quickly. Brown sugar cupcakes with cream cheese frosting that even impressed me, even though I was the one who made them and a batch of very dark chocolate cookies with butterscotch chips that I still dream about….so…yum.

Now life continues on. There is new art to be made, new recipes to explore. There are movies to watch, books to read and I really need to start listening to music that was not recorded by David Gray…eventually…

pee ess: This concert was actually on tv while I was at comic-con. I fell asleep to it. Which brought the whole thing full circle.
Posted by ren at 4:42 PM 1 comment: