Well , it was another exiciting weekend over here that involved a lot of dozing on the couch. Seriously. But it also involved a preview of the new Simpsons ride in Universal Studios, Hollywood, some dinosaurs, a “rock and roll music” concert, extremely high temperatures and…dozing on the couch. Most notably, we turned the air conditioner on…twice! How exciting is that? Very exciting in our house. But high temps and too much sun gave me a migraine and the only thing that would soothe it was cool air and a couch. 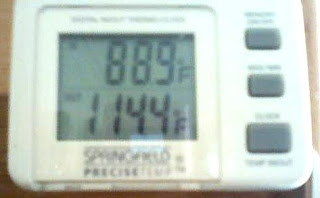 To be fair. The picture above was taken near sunset. When the sun is actually hitting the wall on which the thermometer is positioned. So, one wall of my living room is getting the 114 degree blast while the back of the room isa more reasonable 95 degrees. The room itself stayed cool-ish. But the air conditioning helped get it down below 85.

So the Simpsons ride? Very cool. Very fun. Very fast. As one of the guys I was with pointed out, the most exciting part of it was being on a ride that was not yet sticky from the hands of a thousand tourists. Personally, I am not much a fan of Universal Studios. There’s not a whole lot there and…eh. But I can see it from my back window so when the chance came to ride the ride, I didn’t turn it down. 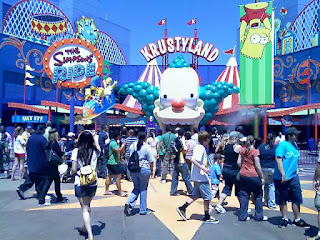 The Simpsons Ride before it gets all...sticky.

Apparently, the style of the ride is similar to the old Back to the Future ride (which it has replaced) but I don’t remember if I was ever on that ride (my husband claims that I was, but he also claims that my favorite cookies are gingersnaps and he is wrong so…you know…grain of salt and all that). It’s a virtual thing where you kind of start off in a virtual rollercoaster and then the story progresses into a wild chase. All your favorite characters are there and it’s pretty darn exciting. Lots of detail went into the whole set up, from the entrance throughout. I enjoyed it immensely. And I would say if you are a Simpsons fan, it may be worth it to go to Universal just for the ride.

And while I was in the park, I got to ride the Jurassic Park water ride for the first time ever. I am assured by those in the know that it was much more awesome ten years ago. Nonetheless…yay! Dinosaurs! So, you know…cool. I did try to get on this ride one other time, maybe 8 years ago. I made it all the way to the front of the line when they closed it down due to too many baseball caps in the water filtering system. Yeesh. But still..dinosaurs! (Stegosaurus is my favorite.)

What else? Oh the rock and roll musical concert was Crowded House. Very nice. It was the husband’s birthday and he was gifted with a ticket so away we went. Nice venue. Good music and lots of old people rocking out. What more could you want? Ok…old is a relative term. They were all about my age. Which is old. But clearly not too old to rock out because that’s what the audience did. And I personally never thought of Crowded House as a WOOOHOO! YOU ROCK! I GOTTA DANCE! Sort of band, but the rest of the world apparently does. That’s ok, have fun old people. I’ll sit here quietly and watch.

And then there was the dozing. And the cleaning of the bathroom. And the nice sushi dinner. OH! and Doctor Who! With Tim McInnerny. I love him so very much. Thank you Doctor Who writers. You are doing a bang up job of employing my favorite actors. How about a little Alan Rickman now? Or maybe some Stephen Fry? You know you want to… 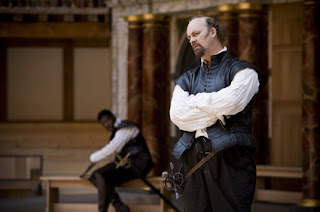 OH MAN! In searching for a wee picture of Tim McInnerny because you know I can’t resist, I came across a review of him in OTHELLO, my favoritest of favorite Shakespearian things. I had read the glowing reviews of Eamonn Walker’s Othello and somehow glossed right over the fact that one of my favorite actors played my favorite part in my favorite play. Tsk. I should pay closer attention. I know you think I am a little goofy when I get all swoony over him, but dude...talent.
Posted by ren at 6:49 PM

My friend Gina may very well have been one of the people dancing. Ha! I'll have to ask her. I'm glad you guys had fun though.

hmm, i don't think tim was in the episode of dr. who that aired over here, strange. are you watching on scifi? or maybe we missed him? hmmm.
i thought your thermostat said it was 889 degrees. now THAT'S hot.